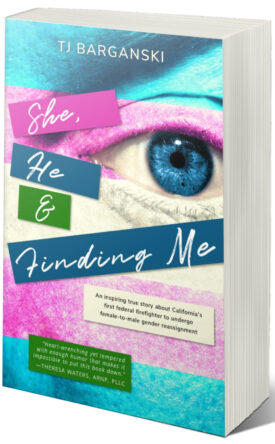 She, He & Finding Me

TJ Barganski grew up in a dysfunctional Mormon home as a female, yet from a very young age he felt like a boy in a girl’s body. Too young to understand or articulate why he felt like a misfit, he became an angry and confused child who acted out. In addition to being bullied, tormented, abused, and sexually molested, Barganski was put in special education in school. Nobody knew what to do with him.

As a young adult, Barganski first became a firefighter and then enlisted in the Navy with hopes that would give him peace. But after serving his country for two years, he was unceremoniously discharged for homosexuality just two years before it became a nonissue.

He left the Navy, returned to firefighting, and became a federal firefighter. He loved his job but endured relentless ridicule and torment at the hands of his firefighter brothers. One day, he just couldn’t take anymore.

In May 1995, on his twenty-ninth birthday, Barganski underwent the final surgery that would complete his transition from female to male, and finally begin living life as a man. In doing so, he became California’s first federal firefighter to undergo female-to-male gender reassignment.

“With each surgery I endured, it was as though an emotional weight was lifted from the deepest part of my inner soul. The pain and recovery were nothing compared to the years of mental torment, emotional torture, taunting, teasing, and being ridiculed my entire life. At long last, I felt as though I was slowly setting myself free and becoming the person I should have been born as,” says Barganski.

After finding peace as a man for the past 25 years, Barganski shares his story for the very first time in his debut book, She, He & Finding Me. In poignant detail, Barganski reveals candid glimpses of what it means to live with gender dysphoria with hopes of raising awareness and sparing others the pain he lived with for the first 29 years of his life.