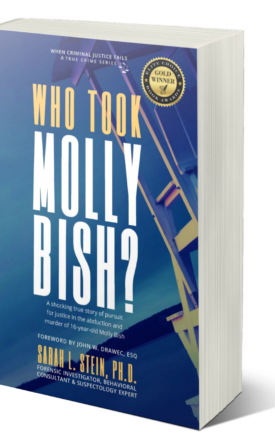 16-year-old Molly Bish began her eighth day of lifeguarding at Comins Pond in the small town of Warren, Massachusetts. Around 10 a.m., between the time her mother dropped her off and the first swimmers arrived, Molly was abducted. Oddly, the day before her disappearance, Molly’s mother saw a sinister looking man sitting in a white car parked in the pond’s dirt lot near Molly’s lifeguard post.

Three years later, Molly’s remains were found less than three miles from where she was taken.

In 2003, Dr. Sarah Stein joined the search for Molly’s killer. In chilling detail, Stein takes readers behind the scenes and into her own investigative files of one of Massachusetts most challenging cases—and uncovers who she believes killed Molly.

Calling for police accountability and transparency . . .

In Who Took Molly Bish, Stein lays bare the struggles real families of missing persons face—even when armed with credentialed experts. Why has the case languished for so long? Why was Stein’s top suspect never investigated?

Now a renowned investigator, Stein has confronted, interviewed, and studied scores of crime scenes and criminals, and must relive the actions of both killers and victims as she attempts to create their profiles and search for that one elusive piece that could solve the crime.